Thai boxing, or Muay Thai as the Thai people call it, is a traditional art of self defense of the Thais. It is different from international boxing in that in the Thai style of unarmed fighting, feet, elbows and knees are used as well as fists. Thus, it resembles more to a real free- for-all fight and is therefore considered superior to international boxing as an art of self defense. As it is more exacting, a Thai boxing match lasts only five rounds of three minutes each, with a two-minute rest between rounds.

Since ancient times the Thai rulers have attached great importance to the training of their soldiers and the ordinary people in the skills of hand-to-hand fighting, both with and without weapons. While the latter is known as muay, the former is called krabi-krabong, literally sword and baton, though the weapons used are not limited to these two. Very often, the rulers themselves were great fighters–strong, valiant and skilled in the art. That is one of the reasons why the Thais emerged a victor in their rivalry with other races and became dominant in this part of the world.

When the first Thai kingdom was set up in the late 13th century with Sukhothai as capital, a piece of ground in front of the palace was used by the king himself for practicing shadow boxing and also as a stadium where boxing contests were held to select good boxers as palace guards.

When the power of Sukhothai declined, another Thai kingdom rose in the lower reaches of the Chao Phraya River in 1350 with Ayutthaya as capital. The Kingdom was ruled successively by 35 kings of five dynasties until 1767, when Ayutthaya was occupied by the Burmese invaders. During this long period of over four centuries, several outstanding Thai boxers were produced. The first was King Naresuan the Great (1590-1605).

When Naresuan was a boy of nine, he was taken to Burma as a hostage following the first fall of Ayutthaya to the Burmese which resulted in the conqueror’s installation of Naresuan’s father, Maha Thammaraja, as the new king of Siam. Six years later, the Siamese prince was allowed to come back home, but only after he had won a boxing match with a well- known Burmese pugilist, which was a precondition set by the Burmese ruler for his release. Latter, Naresuan declared Siam’s independence from Burma and, with his fighting skills, was able to repel another invasion from Burma and killed the crown prince of the enemy in the decisive battle.

Another Ayutthayan king known for his fondness of and expertise in boxing was Sanpet VIII. He once fought two boxers consecutively in a village fair not far from the capital. He beat both of them and won a prize of two bath from the ringmaster without revealing his real identity. But he did not use his special ability to bring glory to his country, but indulged himself in sensual pleasure. He soon acquired the bad reputation of being a cruel sexual pervert and the infamous nickname of “King Tiger”. 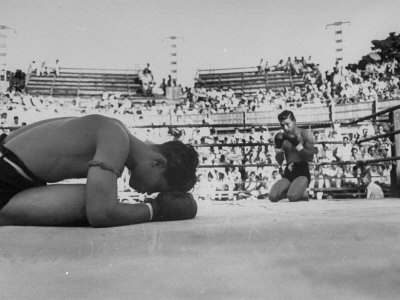 After expelling the Burmese aggressors in late 1767, Phraya Taksin ascended the throne at Thom Buri. Himself a great warrior and keen boxer, the king spared no efforts in promoting the art of hand-to-hang fighting. Links his predecessors, he held boxing matches in his palace grounds. Among these the best known was Phraya Phichai the Broken Sword. He got the nickname because he once broke his sword in a fierce fight with the enemy and subsequently killed the enemy with the broken sword. He was later made governor of Phichai with the title of phraya.

RamaI, who founded the Chakri dynasty in Bangkok in 1782, also used the grounds in front of his palace as an arena where boxing matches were held to select his guardsmen. Once during his reign, there were two French brothers coming to Bangkok looking for rivals in free-style boxing contests with stakes. They had toured several cities in Indochina for the same purpose and had won a lot of money. To meet the challenge, the king assigned his foremost boxer Muen phlan to fight one of the brothers. It was an uphill task for the Thai boxer who was inferior in size and weight. However, he was able to use his superior skills in kicking, punching and attacking with elbows and knees to his advantage and defeated the brothers one after the other.

Rama V (1868-1910) was another king who was a great patron of boxing. He promoted the martial art by setting up his own boxing camp and encouraging the princes and other members of the nobility to do the same in all major cities of the country. He arranged boxing contests regularly and awarded the winners with rank and money.

Rama VI (1910-1925) took a step further by allowing commoners to run their own boxing camps, boxing rings and boxing competitions. The first modern boxing ring was erected on the football ground of Wang Suan Kulap or Rose Garden Palace in Bangkok. It was a raised square space enclosed by ropes with two referees to control matches, one at the blue corner and the other at the red corner. In a contest, the boxers’ hands were bound with strings instead of wearing padded gloves as is the universal practice today. Thus, Thai boxers of former times could do much greater damage to each other in a match. What is most strange is the timing device, which was a holed coconut shell. It was placed in a tub filled with water at the beginning of a round. The round ended as soon as the coconut shell was completely immersed in the water.

The best Thai boxer of the time was a Korat man named Yang Hanthale. He became internationally known after beating a Shaolin-school boxer from China, Chin Chang, in a free- style match at the palace stadium. Chin was defeated because he failed to find an effective way to fend off the quick and powerful high kicking of the Thai boxer. Consequenty, he was hit at the neck into unconsciousness and had to be carried off the ring.

The boxing ring was successively moved to Tha Chang, Suan Sanuk and Lak Muang, all inside the ormer walled city of Bangkok. It was in 1919 when boxing matches were held at Tha Chang that the rules of Thai boxing were changed to require all boxers to wear boxing gloves in contests.

All the above boxing rings were temporary structures. The first permanent boxing stadium in Bangkok was built on Rachadamnoen Nok Road and was first opened in December 1945. Half a century later, Ratchadamnoen Boxing Stadium is still one of the two major stadium in the capital, where both Thai and international boxing matches are staged regularly, the other being Lumphini Boxing Stadium near Lumphini Park. Major matches are often televised live. And there are many other boxing rings in large cities throughout the country. So it is not difficult for a foreign visitor to Thailand to find out at first hand what Thai boxing is like. 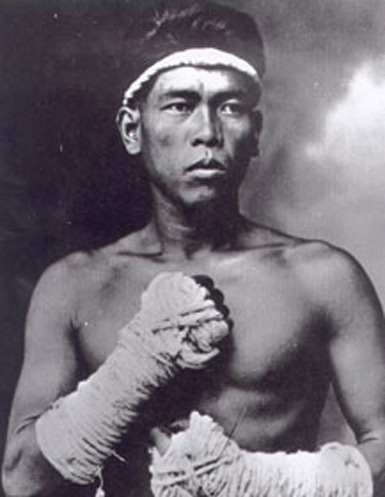 Just getting started? Want to know more about our Muay Thai classes? This is your path to new technique and fitness.

At SRG, technique is something that always comes first. Improving your Muay Thai technique, fitness and endurance.

A Fighter is a beginner that never gave up, achieved a high level and is ready to test themselves with a real battle inside the ring.